Can I practice Yoga during pregnancy? 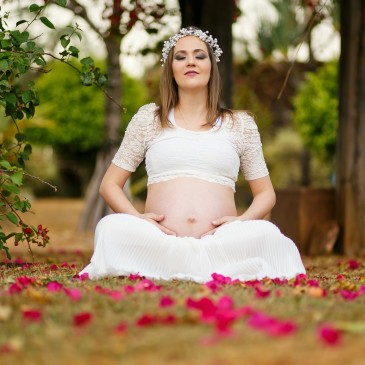 During pregnancy, woman in a unique and special way turns towards herself. Her body becomes the first home for a child, and women's sensitivity increases on what she should do or should not do. Being aware of how the phisical excersise positively affects not only her body, but also the child's development, a great number of girls during pregnancy want to stay active. It is not surprising that many pregnant women are interested in practicing yoga and they are looking for the answer to the question: can I practice yoga during pregnancy?

I am a yoga teacher. I also teach pregnant women and my answer to this question is: yes - you can safetely practice yoga during pregnancy. I practiced yoga during my three pregnancies and honestly I think it had a great positive impact on my pregenancy experience. However, it is worth knowing that there are certain obstacles that may limit and / or exclude the possibility of yoga practice while pregnant.

Is it possible to practice yoga in the first trimester?
First trimester is a special time of pregnancy: the time of intense changes in the body. If a woman practiced yoga earlier, or she was doing sports that sensitized her to the signals flowing from her body, then the practice of yoga is possible. However, this is not a good time to start learning yoga.

Yoga in the second and third trimester
If a woman never practiced yoga, and she wants to start, the second trimester is a very good time to do it. Usually during that time women have a lot of strength, and the unpleasant symptoms of the first trimester are over. I advise finding yoga lessons dedicated for pregnant women. They are often offered by birth and yoga schools. Those classes take into account the special condition that the woman is in. Another way to start is to find a teacher who will lead individual lessons for a pregnant women. But most imporantly, it is not a good idea to practice alone at home (watching Youtube), when yoga has never been practiced before.

It's good to keep in mind that during pregnancy body releases big amounts of relaxin. This hormone is responsible for loosening of the connective tissue and may facilitate entering certain positions. However, loosening in the joints may lead to their strain and even damage during exercise. Having said that, never do exercises intensively at 100 percent. From my experience, "less is more", and the practice yoga on 30 - 40% of our full possibilities brings much better and deeper effects, and above all - it is 100% safe.

Practicing yoga during pregnancy – what to pay attention to?
Yoga practice during pregnancy will be very fluctuated. Something which will be easy at the beginning of the pregnancy, can be very difficult towards the end. You should observe yourself and practice with a calm and conscious breath. It is worth remembering that you can always stop the exercises when you are tired.
It is not recommended to contract the abdominal muscles. You should avoid exercises that activate these parts of your body. Also, do not perform any positions lying on the stomach.
All twists of the body should be done in a gentle, subtle way. When you're practicing, try to avoid squeezing and turning of the abdomen.
You should perform vinyas (sequences such as Salutation of the Sun) with moving to individual positions instead of jumping.
If a pregnant woman has never performed an inverted position (standing on her head, on her shoulders, on her arms and forearms), then pregnancy is not a good time to learn these demanding asanas. However, if a woman has previously practiced reverse positions, you can safely do them until the end of the second trimester (but it is worth doing it always under the supervision of a trusted teacher).

4.80 / 5.00 946 reviews
IdoSell Trusted Reviews
2022-03-20
Thank you Pupus for delivering directly to Sweden! Our retailers have a limited offer of your products yet. I love the stretch in your PUL material. It is known in Sweden that polish brands have neat models, many of us are looking for less bulk. Pupus is one of the most stretchy, on top of the great cut of the diapers. The double gussets make them safe from leaking. I appreciate the natural cotton inside the pocket diapers, also stretchy and easy to clean. I must admit though, I will probably not be able to use the OneSize quite as long as I wish : despite following the minus one weight curve, my daughter seem to be chubbier than polish kids
2022-03-19
Fast order receipt!
View all reviews (946)
This page uses cookie files to provide its services in accordance to Cookies Usage Policy. You can determine conditions of storing or access to cookie files in your web browser.
Close